Fort Hood shooting raises questions over high suicide rate among veterans - The Guardian: "One highly respected institution, in spite of intensive research, had to admit this year that the root causes of military suicides remained unknown."

Fort Hood shooting raises questions over high suicide rate among veterans
The Guardian
The statistics for the US military on mental illness, alcoholism and suicidewere already damning before the Fort Hood shooting, with more militarypersonnel killed on home ground than in combat. No one yet knows why the suspect, Ivan Lopez, carried ...
Related Articles »

Statistics on mental illness, alcoholism and suicide in US military were damning before and are proving hard to explain 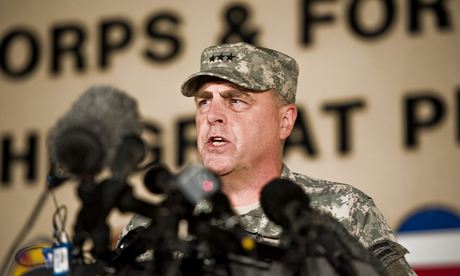 Lieutenant General Mark Milley says Ivan Lopez was known to have behavioural and mental health issues and was being treated. Photograph: Ashley Landis/EPA
The statistics for the US military on mental illness, alcoholism and suicide were already damning before the Fort Hood shooting, with more military personnel killed on home ground than in combat.
No one yet knows why the suspect, Ivan Lopez, carried out the shooting spree at Fort Hood, Texas, before turning the gun on himself, but he was taking medication and undergoing diagnosis to determine whether he was suffering from post-traumatic stress disorder (PTSD). He had served in Iraq for four months in 2011.
Lieutenant General Mark Milley, head of the army's 111 corps at Fort Hood, said: "We do know that this soldier had behavioural health andmental health issues and was being treated for that." He said Lopez had diagnosed himself as suffering from a traumatic brain injury but Milley added that the shooter, who had been engaged in logistical support, had not been wounded in action.
The oft-quoted statistic is that, going back to at least 2008 and in other years since, more American soldiers have committed suicide than have been killed in combat. Last year the US department of veterans affairs issued the startling figure that 22 veterans killed themselves every day.
There is no consensus on why. Many intensive and costly studies have reached different conclusions or have even avoided an explanation when presented with glaring contradictions.
One highly respected institution, in spite of intensive research, had to admit this year that the root causes of military suicides remained unknown. There have been several attempts to debunk the notion of the "dangerous veteran". In a 2007 report on veterans in state and federal prisons, researchers at the Bureau of Justice Statistics found that during the past three decades, the number of veterans in US penitentiaries had declined.
But undoubtedly the US army has suffered over the past decade from what its commanders routinely refer to as overstretch – too few soldiers to fight two wars simultaneously in Iraq and Afghanistan. Tours of duty became longer and more frequent. That seems an obvious explanation for why suicides have been rising. But it is not as simple as that.
One of the largest studies of military suicides, published in March this year, showed that suicide rates among soldiers who had served in either Iraq or Afghanistan had roughly doubled from 2004 to 2009, to more than 30 suicides per 100,000.
The studies were carried out by the National Institute of Mental Health (NIMH), which looked at the records of about 1 million soldiers. The findings would seem to support the idea of combat stress. But the study found that while the number of suicides had roughly doubled among Iraq and Afghanistan veterans, the numbers had trebled among military personnel who had never been deployed. No explanation for the discrepancy is offered.
The military is struggling veterans' not only with PTSD but a host of other problems, not least alcohol and substance abuse, domestic violence, personal financial problems and inability to find jobs at home. One explanation is that, faced with fighting two wars, the military relaxed its recruitment criteria.
According to the NIMH, about one in five US soldiers suffered from depression, panic disorder and other mental illness before enlisting. But with the end of the American military role in Iraq and its winding-down in Afghanistan, the US army has been shrinking – and screening of recruits has become much tougher.
In theory, given the more selective nature of the recruitment, the easy access to healthcare and the high standards of fitness, the military should have lower suicide rates than civilians, or at least be on par with them. Before Iraq and Afghanistan this was the case, but not since.
One of the problems in the US is that the military will fund treatment for PTSD but is less enthusiastic about investing in treatment of other mental illnesses. Doctors sympathetic to the troops will often place those being treated in the PTSD category so they will be entitled to have medical bills paid. The downside is that this inflates the percentage of those judged to be suffering from PTSD.
There are similar problems in Europe from soldiers returning from duty in Iraq and Afghanistan but fewer of the shootings seen in the US. One explanation is the easier access to guns. Lopez, according to Milley, bought the semi-automatic locally and did not register it with the base.

America's Military Suicide Crisis: Awareness, Compassion, Prevention
The Epoch Times
Let us fast forward to current military sacrifices. Compounding the sacrifices that have been made on the battlefield, there is a staggering rise in military suicides. According to a Department of Veterans Affairs report, an average of 22 veterans ...
Posted by Michael Novakhov (Mike Nova) at 4/06/2014 05:01:00 PM No comments: