Mike Nova: Breivik Trial and The Crisis Of Psychiatry As A Science

Breivik Trial and The Crisis Of Psychiatry As A Science

Breivik Trial and The Crisis Of Psychiatry As Science - Links

All symptoms and behaviors fit into this (relatively rare but very well recognised, well described, discrete - which is important for its clinical validity; and very interesting psychopathologically and also historically - Krepeline, Freud, etc.) syndrome quite nicely. If these diagnostic impressions are confirmed in further psychiatric evaluations and affirmed by the court, then Breivik definitely should not be considered legally responsible (although he is fit to proceed) for his crime and should be treated as an "insane" and mentally ill.
In addition to this, his habitus (square face and jaw, etc.) and quality of his emotional reactions (e.g. on questioning on Day 3 of the Trial) betray the signs of subtle yet visible organicity with some affective involvement. It would be surprising if his cognitive functioning and the results of neuropsychological testing are intact completely. The results of EEG, including sleep deprivation EEG, would be interesting to see; temporal lobes dysfunction is quite possible.
The results of projective tests could shed some light on the state of his emotional life.
Is it possible to influence or use for adverse purposes a person ill with Delusional Disorder, in other words, to "program" them? Yes, it is, if it is done skillfully and suggestions are incorporated into a subject's delusional system or if the delusions are shared.
Thus, a new vista of possibilities has opened, in the light of Day 3 of the Trial's revelatons of Breivik's connections with Serbian nationalists and history of his military or intelligence training in Belarus.

The “Pseudocommando” Mass Murderer: A Blaze of Vainglory - Psychiatric Times
*

Alistair Munro
0 Reviewshttp://books.google.com.pr/books/about/Delusional_Disorder.html?id=tjZRqzXK2gkC
Cambridge University Press, Mar 4, 1999 - 261 pages
Delusional disorder, once termed paranoia, was an important diagnosis in the late nineteenth and early twentieth centuries. Only in 1987 was it reintroduced into modern psychiatric diagnosis after being incorporated with schizophrenia. This book provides a comprehensive review of delusional disorder for psychiatrists and other clinicians. Beginning with the emergence of the concept of delusional disorder, the book goes on to detail its manifold presentations, differential diagnosis and treatment. The author provides many instructive case histories, illustrating
delusional disorder

The “Pseudocommando” Mass Murderer: A Blaze of Vainglory - Psychiatric Times

via Forensic Psychiatry News by Mike Nova on 4/18/12
The “Pseudocommando” Mass Murderer: A Blaze of Vainglory - Psychiatric Times

Anders Breivik: The First Step to Mass Murder Is a Belief in Good and Evil - Huffington Post (blog)

Anders Behring Breivik's court statement 'an explanation not a speech', says ... - The Guardian

Breivik: a monster made by multiculturalism - Telegraph.co.uk (blog)

Death or acquittal 'only logical outcomes' for massacre, Breivik says - Globe and Mail

Logical punishment for massacre is death or acquittal, Breivik says - Globe and Mail

Luton hits back at 'nutter' Breivik - The Press Association

The man who has admitted the mass killings of 77 people in Norway last year has told a court he acted out of "goodness, not evil" in order to
18 minutes ago33 views

its last mission; it's been trial video: 'Norway killer' claims self-defense, cries in court is on trial on terror
zzBalaklavAzz1 hour ago

On trial for allegedly killing 77 people in last year's massacre in Norway, concluded a day of chilling testimony by
PBSNewsHour
2:01

Admitted Norway Killer Breivik: 'I Would Have Done it Again'

When , the defendant in last year's Norway's massacre who is accused of killing 77 people, took the witness stand Tuesday
PBSNewsHour
0:57

--Norway shooter Anders Behring Breivik pleads not guilty at his murder trial, and questions the Judge and the entire court system's legitimacy. -- ...
MidweekPolitics11 hours ago288 views

My battle is against immigration, don't ridicule me: Breivik - Zee News

Who are the Knights Templar? A look at many groups - Newsday

via Google News on 4/18/12
See more of Mike Nova's starred items ...
Get started with Google Reader


Anders Breivik trial: Who are the Knights Templar? - Toronto Star

Video: Anders Behring Breivik: 'I would have done it again' - Montreal Gazette 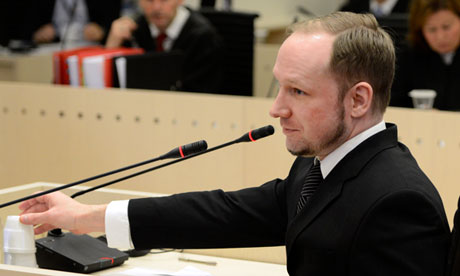 Anders Behring Breivik sitting in the witness box is interrogated by the prosecution during the third day of his trial in Oslo. Photograph: Odd Andersen/AFP/Getty Images

3.35pm: Here's a summary of today's proceedings:
• Anders Behring Breivik said he should either be acquitted or executed, describing the maximum jail term of 21 years as a "pathetic punishment". He said he did not wish to be executed "but would have respected it".
• On his second day of questioning by the prosecution, he showed several signs of frustration, accusing his interrogator variously of ridiculing him, "delegitimising" him and calling him a liar. He refused to answer a number of questions. Amid suspicions that he could not verify information in his manifesto he insisted that he did not want to help the prosecutor and/or was protecting others.
• Breivik said his actions on 22 July last year were inspired by "Serb nationalists" as he attempted to distance himself from the "old school" of rightwing extremism propagated by the Nazis.
• The accused claimed that he met a Serb nationalist wanted for war crimes when he visited Liberia in 2002. He refused to name the man in question but Norwegian police suspect he was referring to former paramilitary commander Milorad Ulemek, who was convicted of assassinating Serbia's pro-western prime minister Zoran Djindjic. However, police are not sure whether the pair actually met, and Ulemek's lawyer claims they have not.
• Asked if the real reason he went to Liberia was to buy diamonds, the defendant insisted that he adopted the guise of a diamond trader as a "cover".
• Facing scepticism from the prosecution, Breivik insisted that the the Knights Templar (KT) anti-Islam network he claimed to be a member of was real and that he did attend a meeting of the group in London in 2002. But he gave conflicting evidence about the group and his role within it. He described the KT as both a grass roots movement and a series of one man cells. He also said he was a "cell commander" when he came back from the KT meeting in London but later said that that was incorrect. He also failed to explain how he came up with his estimation that there were 15 to 80 members in KT but insisted there were more than 15.
• Breivik talked about the "English protestant host" in London who became his "mentor" but refused to reveal his identity. That man is named in his manifesto, as Richard the Lionheart. Shortly after the 22 July massacre, Paul Ray, who writes a blog under the name Lionheart, said he belonged to an anti-Muslim group called The Ancient Order of the Templar Knights but denied ever meeting Breivik and said he was horrified by the killings (see 10.29am).
• The defendant repeated the claim made to police after his arrest that there were two other cells in Norway ready to attack and said that could happen "any day".
• He described al-Qaida as "methodological role models" for militant nationalists but said the extremist group are "expansionist" while he is "isolationist".

3.04pm: The chief judge, Elisabeth Arntzen, brings today's proceedings to a close.
She says tomorrow will focus on the events leading up to 22 July last year and the bomb in the government quarter of Oslo.
I'll post a summary of the day's events shortly.
3.02pm: Asked whether he wants an ethnically pure Norway, Breivik responds that he can accept 2% of the population not being so.


Breivik: I'd prefer execution to prison