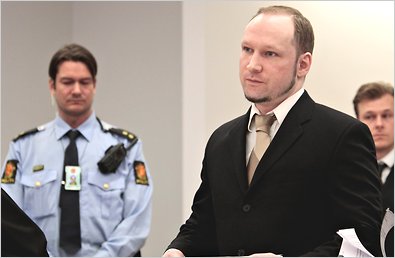 Pool photo by Hakon Mosvold Larsen
Updated: April 19, 2012
Anders Behring Breivik, a Norwegian, killed 77 people in a bombing and a shooting rampage in Oslo and on Utoya Island, a summer camp for young political activists, on July 22, 2011.
Mr. Breivik, a right-wing extremist, admitted to the slayings in a court hearing shortly afterward, but denied criminal guilt, portraying the victims as “traitors” for embracing multiculturalism and Muslim immigration policies.
On March 7, 2012, Mr. Breivik, 33, was indicted on terror and murder charges for the killings. The central issue in the trial will be whether he is insane.
Two court-ordered psychiatric reports have contradictory conclusions. The first report, released in November 2011, determined that Mr. Breivik was a psychotic paranoid schizophrenic before, during and after the attacks. The second, in April 2012, said he was sane, albeit with a narcissistic personality disorder.
His trial, which is expected to last 10 weeks, opened on April 16. By turns defiant, impassive and tearful, Mr. Breivik proclaimed that he acted in self-defense, bore no criminal guilt and rejected the authority of the court. He had previously denied criminal responsibility on the ground that he was protecting Norway against Islamic immigration.
In remarkable evidence played to a packed and shocked courtroom, recordings of cellphone calls made by the gunman to the police suggested that he tried twice to give himself up and simply went on killing in the absence of officers to accept his surrender. In the period after the first call to his final shot being fired, prosecutors said, 41 people died. There has been much questioning of why the police took more than an hour to reach the island after the gunman launched the attack.
Depicted as a Loner Obsessed With Computer Games
On the second day of the trial, Mr. Breivik described the deaths as “the most spectacular sophisticated political act in Europe since the Second World War” and said he would do it over again. He rejected an assessment by one psychiatrist that he suffered from a narcissistic personality disorder. “July 22 wasn’t about me. July 22 was a suicide attack. I wasn’t expecting to survive that day,” he said.
On the third and fourth days of the trial, prosecutors pressed Mr. Breivik on his extremist affiliations. He insisted that he belonged to a “cell” within an organization with members across Europe. He sweated and equivocated through skeptical prosecutors’ questioning about his trips to Liberia and London in 2002, during which he says he met a Serbian war criminal and was a founder of the organization, the Knights Templar. Prosecutors say the group does not exist.

By THE ASSOCIATED PRESS
Anders Breivik, who has confessed to killing 77 people last year, said that before carrying out his bombing-and-shooting rampage, he studied attacks by Al Qaeda and other terrorists.
April 20, 2012
MORE ON ANDERS BEHRING BREIVIK AND: MURDERS AND ATTEMPTED MURDERS, TERRORISM, NORWAY, AL QAEDA

Breivik Says He Wishes Norway Death Toll Had Been Higher

By MARK LEWIS and DAVID JOLLY
Anders Behring Breivik told prosecutors in court that his massacre last summer was justified, and that he had planned to behead a former prime minister.
April 19, 2012
MORE ON ANDERS BEHRING BREIVIK AND: MURDERS AND ATTEMPTED MURDERS, TERRORISM, NORWAY, OSLO (NORWAY)

By MARK LEWIS and DAVID JOLLY
Anders Behring Breivik was questioned about trips to Liberia and London during which he said he met a Serbian war criminal and founded his anti-Islamic militant group.
April 18, 2012
MORE ON ANDERS BEHRING BREIVIK AND: COURTS AND THE JUDICIARY, MURDERS AND ATTEMPTED MURDERS, NORWAY

By J. DAVID GOODMAN
A Twitter thread was soon filled with mockery of its premise of a stealth campaign by Muslims to replace Western values with a version of Islamic law.
April 17, 2012
MORE ON ANDERS BEHRING BREIVIK AND: Muslims and Islam, Shariah (Islamic Law), Europe, Breivik, Anders Behring

By MARK LEWIS and ALAN COWELL
Demanding his acquittal, Anders Behring Breivik took the stand for the first time, describing his killing of 77 people last year as a “sophisticated political act.”
April 17, 2012
MORE ON ANDERS BEHRING BREIVIK AND: MURDERS AND ATTEMPTED MURDERS, NORWAY

By ROBERT MACKEY
Television coverage of the trial of Anders Behring Breivik, the gunman who has admitted that he killed 77 people during twin attacks in Norway last year, showed him smiling, crying and raising his fist in a salute.
April 16, 2012
MORE ON ANDERS BEHRING BREIVIK AND: Murders and Attempted Murders, Terrorism, Norway, Oslo (Norway), Utoya (Norway), Breivik, Anders Behring

By J. DAVID GOODMAN
Anders Behring Breivik, the anti-Muslim militant who admitted to killing 77 people in a bombing and shooting spree last year, began his first day of trial with a disturbing, rod-straight salute of the arm, his fist closed tightly.
April 16, 2012
MORE ON ANDERS BEHRING BREIVIK AND: Fringe Groups and Movements, Politics and Government, Norway, Breivik, Anders Behring

By MARK LEWIS and ALAN COWELL
Anders Behring Breivik, accused of killing 77 people at a camp last summer, was defiant and impassive as his trial opened in the July 2011 killings.
April 16, 2012
MORE ON ANDERS BEHRING BREIVIK AND: MURDERS AND ATTEMPTED MURDERS, FRINGE GROUPS AND MOVEMENTS, MUSLIMS AND ISLAM, NORWAY

By CHRISTINA ANDERSON
A new psychiatric evaluation of Anders Behring Breivik, who confessed to killing 77 people in Norway last year, concluded Tuesday that he was not psychotic when he carried out the attacks.
April 11, 2012
MORE ON ANDERS BEHRING BREIVIK AND: MURDERS AND ATTEMPTED MURDERS, MENTAL HEALTH AND DISORDERS, UTOYA (NORWAY), NORWAY

Norway: Man Is Charged in Rampage

By THE ASSOCIATED PRESS
Anders Behring Breivik was indicted Wednesday on terrorism and murder charges related to the killings of 77 people last July, but prosecutors said he would probably not go to prison.
March 8, 2012
MORE ON ANDERS BEHRING BREIVIK AND: MURDERS AND ATTEMPTED MURDERS, SENTENCES (CRIMINAL), NORWAY

Norway: Killer of 77 Was Insane During Rampage, Prosecution Says

By STEVEN ERLANGER
July 22, when 77 people were killed by a homegrown terrorist in Norway, was King Harald V’s test. He is considered to have passed it.
October 16, 2011
MORE ON ANDERS BEHRING BREIVIK AND: POLITICS AND GOVERNMENT, TERRORISM, NORWAY

Poland: 19 Are Arrested in Sweep Tied to Inquiry on Norway Attacks

By THE ASSOCIATED PRESS
A Polish security agency said Wednesday that 19 people had been arrested on suspicion of producing and possessing explosives as part of a wider investigation into people with links to Anders Behring Breivik.
October 13, 2011
MORE ON ANDERS BEHRING BREIVIK AND: BOMBS AND EXPLOSIVES, NORWAY
Posted by Michael Novakhov (Mike Nova) at 4/21/2012 05:57:00 AM No comments:

Follow @nytimesworld for international breaking news and headlines.
Twitter List: Reporters and Editors
On the fifth day of his trial to determine whether he is sane or insane, Anders Behring Breivik, who has confessed to killing 77 people last year, said that before carrying out his bombing-and-shooting rampage, he studied attacks by Al Qaeda and Timothy J. McVeigh, the Oklahoma City bomber, as well as the 1993 bombing of the World Trade Center. He also said he had read more than 600 bomb-making guides. He called Al Qaeda “the most successful revolutionary movement in the world” and said it should serve as an inspiration to far-right militants, though their goals differ. Later, he described in graphic detail hunting down and killing teenagers at a summer camp. He has pleaded not guilty to criminal charges, saying his victims had betrayed Norway by embracing immigration.
Posted by Michael Novakhov (Mike Nova) at 4/21/2012 05:55:00 AM No comments:

Psychiatry needs to “hug the sciences,” says the chair of the school’s psychiatry department, Laura Roberts, MD, in the new issue of Stanford Medicine magazine.

The lead story in the report, “Inside the head: The future of psychiatry,” describes efforts to end the historic split between psychiatry’s two camps — those favoring psychotherapy and those favoring biological treatments.

Roberts believes that advances in genetics and neuroimaging are already bridging the gulf. “That’s the key to the future, that’s where we discover new ways of understanding neuropsychiatric disease as well as its prevention and optimal treatment,” she said in the lead story. But by treatments, she doesn’t just mean medications. “I can’t imagine a future where psychiatry does not also involve therapy.”

The need to improve psychiatric treatment is urgent. The major methods — psychotherapy and drugs — aren’t working for many people who suffer from mental illness. While psychotherapy is considered the most effective treatment for many conditions, it’s all too common that patients can’t afford it or don’t want to do it. Drugs are often not the answer either, as many patients don’t respond or find the side effects too painful. Furthermore, few new drugs are in the pipeline.

The recent explosion of insights coming from the field of neuroscience is only barely beginning to influence the research and practice of psychiatry — which is not surprising, since neuroscience is not a required subject for most psychiatry trainees. That needs to change, according to leaders such as Roberts, who has helped to launch a course in neuroscience for psychiatry residents, and is introducing additional training for subspecialties such as forensic psychiatry and addiction medicine.


This issue’s “Plus” section, featuring stories unrelated to the special report, includes:


The magazine, including Web-only features, is available online at http://stanmed.stanford.edu. Print copies are being sent to subscribers. Others can request a copy at (650) 736-0297 or medmag@stanford.edu.

Stanford Medicine is published three times a year by the medical school’s Office of Communication & Public Affairs. Follow @stanmedmag on Twitter.
Posted by Michael Novakhov (Mike Nova) at 4/21/2012 05:34:00 AM No comments: