Plugging Holes in the Science of Forensics - NYTimes.com

Plugging Holes in the Science of Forensics - NYTimes.com

Plugging Holes in the Science of Forensics

In a Lab, an Ever-Growing Database of DNA Profiles 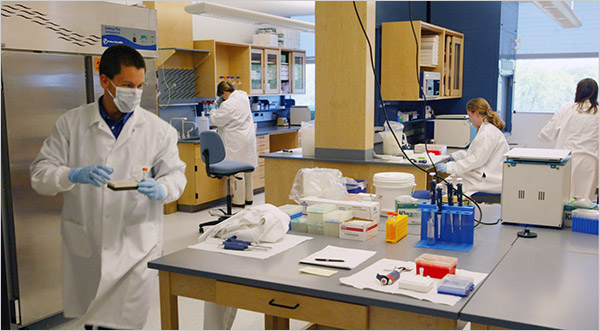 Charles Dharapak/Associated Press
SLEUTHING The F.B.I. crime lab extracts genetic information from thousands of pieces of evidence each year and adds the findings to a database.

Breivik's introduction is entirely given over to a half-baked history of political correctness, "no aspect" of which, he tells us, is "more prominent … than feminist ideology". The PC-project is bent on "transforming a patriarchy into a matriarchy" and "intends to deny the intrinsic worth of native Christian European heterosexual males". But more than that, it has succeeded. The "feminisation of European culture" has been underway since the 1830s, and by now, men have been reduced to an "emasculate[d] … touchy-feely subspecies".
The antipathy to feminism – and women – threaded throughout Breivik's document is more than just incidental. The text is peppered with references to the pernicious effects of the "Sex and the City lifestyle, the propagation of sexual immorality (indexed by women's promiscuity), and the "erotic capital" women use to manipulate men. The degeneration of our civilisation is intimately linked to an epidemic of sexually transmitted disease and "emotionalism". Indeed, the danger of women's "unnatural" demand for equality is such that Breivik closes his introduction by claiming that "the fate of European civilisation depends on European men steadfastly resisting Politically Correct feminism".

This sci-fi fantasy of finally abolishing men's dependence on women's generative abilities is revealing. On the one hand, Breivik indicts feminism with causing our alleged "cultural suicide", both by encouraging reproductive treachery and also because women are apparently more supportive of multiculturalism. However, in another sense, Breivik's thought betrays an analogy between his monocultural nationalism and his veneration of a certain type of "warrior" masculinity, an analogy that revolves – as his manifesto's title implies – around the ideal of masculine independence. The "feminisation" of the European male corresponds to the "feminisation" of Europe itself. Our cultural purity is threatened by invasion from outside. Once proud, virile, and impregnable, Europe has been turned – Breivik suggests in Section 2.89 – into a woman, one who has submitted to rape rather than "risk serious injuries while resisting".
Unlike Breivik, we must resist the urge to make easy causal connections. No account of this man's background or beliefs about nationality, religion or gender can serve to explain his actions. His cool enumeration of technicalities about downloading the document, his careful inclusion of a press-pack of photos, the chilling reference to the sacrifices involved in its "marketing operation" – all this serves to exhibit an inhumanity which opens a chasm between ideas and action. Nevertheless, while the behaviour of Breivik must, and can, only be understood as insanity, we would do our understanding a disservice by accepting it as only that.


July 25, 2011 12:37 AM EDT
Anders Behring Breivik placed himself potentially outside of religious Christianity in a 1,500 page manifesto he has reportedly admitted to writing.
"A majority of so called agnostics and atheists in Europe are cultural conservative Christians without even knowing it," he wrote.
Posted by Michael Novakhov (Mike Nova) at 4/22/2012 09:37:00 AM No comments:

As Anders Breivik tried to justify his killing of more than 70 people to an Oslo court, David Blair was sitting a few rows behind him. It was a chilling experience.

Anders Behring Breivik in court: As he spoke, a handful of survivors stood up and left the court. A few others wept Photo: AFP/GETTY
Later, Ms Engh’s iron self-control lapsed, for a moment, into exasperation. The killer would constantly refer to what he grandly called his “compendium” – several thousand pages of rambling paranoia, most of it cut and pasted from the internet, serving as the ideological basis for his actions. Once, he called it a “draft”, and remarked that he was still deciding if he believed in all it contained.
Posted by Michael Novakhov (Mike Nova) at 4/22/2012 09:04:00 AM No comments:

via NYT > Anders Behring Breivik by By THE ASSOCIATED PRESS on 4/19/12
Anders Breivik, who has confessed to killing 77 people last year, said that before carrying out his bombing-and-shooting rampage, he studied attacks by Al Qaeda and other terrorists.

Breivik Says He Wishes Norway Death Toll Had Been Higher

Anders Behring Breivik told prosecutors in court that his massacre last summer was justified, and that he had planned to behead a former prime minister.

Anders Behring Breivik was questioned about trips to Liberia and London during which he said he met a Serbian war criminal and founded his anti-Islamic militant group.

via NYT > Anders Behring Breivik by By J. DAVID GOODMAN on 4/16/12
A Twitter thread was soon filled with mockery of its premise of a stealth campaign by Muslims to replace Western values with a version of Islamic law.

via anders behring breivik - Google Blog Search by The Week on 4/19/12
The anti-Muslim extremist is using the courtroom as a soapbox, but he might actually be discrediting his cause and making a case for trying terrorists in civilian court.

I am not a psychiatric case,Breivik tells court - Indian Express

via Google News on 4/21/12
See more of Mike Nova's starred items ...
Get started with Google Reader

Murder by the Drop